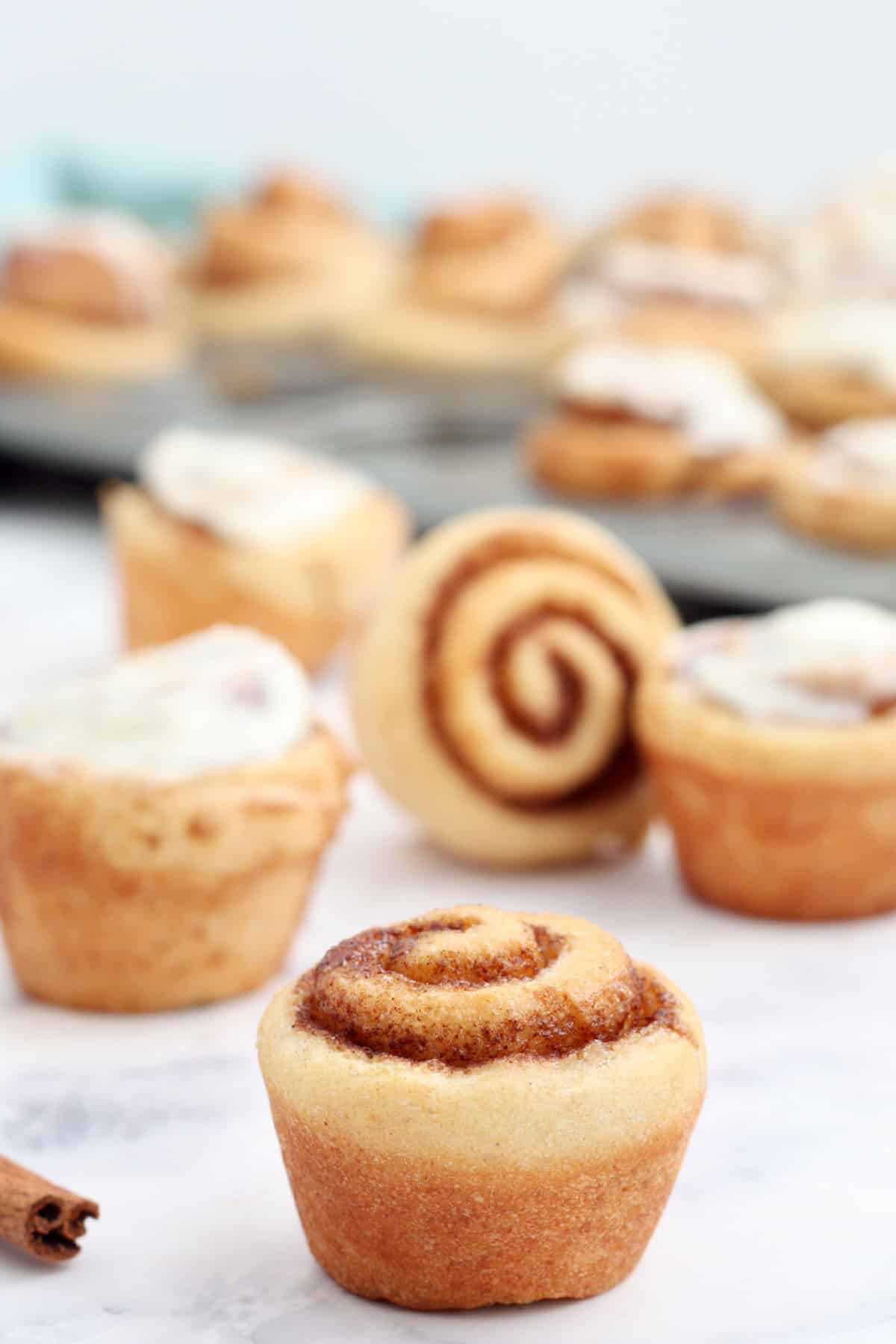 These mini cinnamon rolls are a bite-sized version of a classic cinnamon roll with a soft, pillowy interior and a golden brown exterior that crisps up slightly with a sweet glaze. These bites are made with half the sugar of other cinnamon roll recipes and are just as delicious!

Why We Love These Mini Cinnamon Rolls

If you love the taste of Cinnamon Rolls but are looking for a healthier option, these Mini Cinnamon Rolls are for you! Made from soft, whole grain flour and sweetened with a touch of sugar, these mini rolls are a delicious and nutritious twist on classic pastries.

I knew I wanted a healthy cinnamon roll recipe on my site for a long time. My daughter is really good at making Cinnamon Rolls, and there were several weekends when we enjoyed them. However, the recipe we usually use was butter-drenched, with large amounts of brown sugar, white sugar, and cinnamon. Don’t get me wrong… they were amazing. But I knew we could do better, and I knew that with just a few modifications, we could still make them delicious while cutting down on most of the sugar we were using.

And we did it! These mini cinnamon rolls are so delicious, easy to make and you won’t feel heavy after eating them!

Ingredients required for this recipe

What is whole wheat flour?

These Cinnamon Rolls start with some whole wheat pastry flour. Regular wheat flour is heavier and more dense. When you want to make a more delicate pastry but are trying to use as much whole wheat as possible, whole wheat flour is a great option. According to the Bob’s Red Mill site,

Which Yeast Is Best for Mini Cinnamon Rolls?

There are two main types of yeast used in baking. Active dry yeast and instant yeast.

Active dry yeast is made by drying yeast cells in a process that removes some of the moisture. As a result, it is less potent than instant yeast and takes longer to rise. Active dry yeast should be dissolved in warm water (110-115°F) before adding to flour. It is best to proof the yeast (test it to be sure it is active) by mixing it with a small amount of sugar (or honey) in a small amount of warm water and waiting for it to become frothy before using it in your recipe. Do it. ,

How to make Mini Cinnamon Rolls?

What Happens If Your Cinnamon Roll Takes Too Long?

As the dough rises, air pockets are created in the dough. If the dough rises for too long, the dough may become too puffy and may not hold its shape when baked. Cinnamon rolls can also be very large, which can make it difficult to bake them evenly.

If you notice that the dough is rising too quickly, you can punch it to release some air and then let it rise again for a short period of time. You can also refrigerate the dough to slow down the rising process.

I am a registered dietitian, mother of 4, foodie and a strong advocate of healthy habits. Here you’ll find tons of delicious recipes full of fruits and vegetables, tips for getting your kids to eat better and become healthier eaters, and tons of resources for feeding your family.

Why Use A Wooden Comb: 8 Benefits For Your Hair And Scalp

CBD for Athletes: What Does the Science Say?